Embracing It! by Michael Hickey

Hey CPC members! It's been quite a while since I've written, so now I feel it's time to see how things are going with my conversion to digital two years ago. First off, WOW!! How fast has two years gone by? I'm still constantly amazed by the passage of time and the changes that it brings - and sometimes, doesn't bring.

As the title of this article implies, I don't have to tell you all that I'm more than pleased with the conversion. I haven't even thought about returning to film shooting. Don't get me wrong, I still love my images shot on film. I still cherish every second of every trip taken with film camera in hand. I've simply moved on to a better way of doing the same things I've always done - and that is to attempt to make the best possible image I can. I specifically recall Mary Ann Durso telling me on a trip to the Smokies in 2008, "Michael, with digital you'll be more creatively free". At the time I didn't believe her. I was stubbornly holding onto my ways of doing things, and felt digital wasn't for me yet. I guess we all must move in our own time. Well, let me now tell you Mary Ann was right! Although I've never felt creatively hampered while shooting film, I've come to realize with digital that I am more free to take any chance that I want because of the instant two-way flow of energy I feel while in the moment. With film, it was only a one-way flow because I couldn't actually see the results of my creative attempts. As we all know, with digital, you instantly see your image - which STILL delights me like a child getting a gift - and with this immediate gratification comes the second part of the two-way energy flow: correcting, altering, enhancing or changing the direction of your internal process of image-making. That's where all the freedom reveals itself! With film, I had to remember, sometimes weeks after the image-making process, what I was thinking and doing because of the lag time between making the images and seeing the results. Now it's simply magical to me to be able to adjust not only the actual look of the image, but to adjust my artistic intentions while in the field. Seeing the image immediately facilitates more creative ideas, which only leads to a positive spiral of photographic happiness for me. It also leads to forgetting to eat, forgetting where I've parked, and other common sense, every-day activities - of which I'm more than pleased to do when I'm "in the zone".

I've not only embraced the in the field aspects of digital photography, but I've more importantly embraced some of the post-processing options available. In a word - Photomatix! Yes, this is my new favorite thing. With film, I tried to previsualize how my image would look on the slide, and eventually as a print. Now I try to envision how my exposure-bracketed images are going to look after being put into Photomatix, and then lightly tweaked in Photoshop. This helps fuel my creative juices while on a photo shoot. I try to see the synergistic final result of three or more images made in the field, and this is a great portion of the new-found fun I have with all of these digital options. I look forward to the post-processing of my images. I still have the film shooter's mentality, however. On my last Smokies trip I only shot 270 images for the entire week! I'm still very much of the belief that you can't make a bad image better. So I still try to make it as good an image as I can in camera - then optimize it in post-processing. The learning curve is still in its beginning stages for me, because I have definitely been the victim of "overusing" some of the applications of Photomatix. I love creating HDR images, but I also don't want them to look like they're too obvious and heavy-handed. This will take some time to resolve, but it's always going to be a very fun challenge. I'm also embracing these mistakes...I don't believe Rome was built overnight, right? But I know without question that there's still so very much more for me to do and learn with my digital camera. And there's more than enough to keep me busy with the myriad of post-processing choices available. I think my next area of fascination will be to use Layers in Photoshop to combine my bracketed images. I recall sitting on my couch with the 456-page manual for my camera in April of 2012, looking like I had just lost my best friend. But here I am two years later feeling like I now have a new friend....oh, about those changes that time does not bring: I still don't have a cell phone!! One new friend at a time... 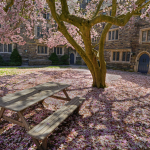 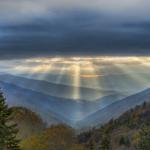 magic in the valley

I've included with the article two images which have been exposure-bracketed in the field, put into Photomatix for an HDR rendering, then lightly dodged/burned/contrasted in Photoshop CS5. The first is from one of the gorgeous courtyards on the ground of Princeton University from last April, and the second is from one of the iconic overlooks in Great Smoky Mountains National Park - Oconoluftee overlook - from our most recent trip this past October.